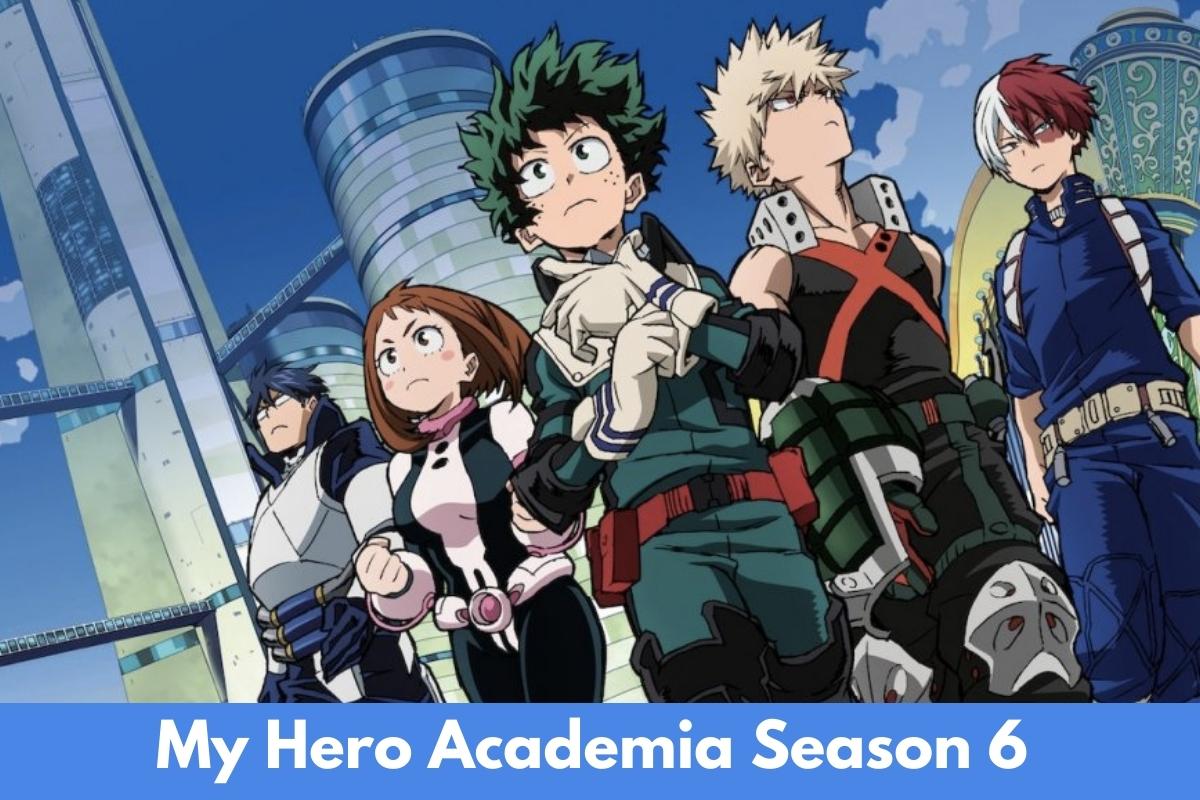 My Hero Academia is a well-liked Japanese anime series based on a successful manga of the same name. The manga is a superhero science fantasy written by kōhei Horikoshi and published by Shueisha, while Yōsuke Kuroda writes the anime television series. Season 1 of the show got aired on April 3, 2016, in Japan, and since then, five seasons of the adventurous My Hero Academia series have premiered.

All the five seasons got huge appreciation from the audience, as is evident from their high IMDb user ratings of 8.5/10. The fans of the series now eagerly want to know will there be a season 6 of My Hero Academia. If you are also a fan of the worth-watching ‘My Hero Academia’ series, you are right.

This article will tell you everything about the upcoming My Hero Academia Season 6, including its Release Date, Cast, Storyline, and more. So, keep in touch!

The show makers have announced and confirmed the My Hero Academia Season 6 of the series for all the fans. In addition, bones Studio has announced after the fifth season’s last episode.

In the recent Jump Festa event, a kind of exhibition and carnival for cartoons and anime, another announcement regarding the My Hero Academia Season 6 was made. Although the exact date is unknown, Season 6 will certainly be released in autumn 2022. But, unfortunately, we need to wait for a few more months to watch its new episodes.

Kenji Nagasaki has wonderfully directed the My Hero Academia anime. It is clear from its first five seasons that the producers have not made many alterations in the cast for successive seasons. Therefore, until we get an announcement from the producers regarding the series’ cast for Season 6, we can consider the cast to be as follows:

When is Season 6 of My Hero Academia coming out? This question is still to be answered as the date is unknown, and so is the case with the final cast. Season 6 Cast may have some new additions and eliminations of characters depending upon the plot.

Bones Studio, the show producer, has released the first teaser trailer for My Hero Academia Season 6. It came out just after the final episode of the fifth season on September 25, 2021. The trailer is a few-second clip that gives a quick glimpse of the upcoming season.

The series revolves around a boy named Izuku Midoriya, who is not a born Superhero but has the potential to become one. All might choose him to be his upcoming successor. Season 6 will follow the manga’s most celebrated ‘Paranormal Liberation War’ arc. To know the whole plot, we all need to wait till the premiere of Season 6.

The producers have no official update regarding the My Hero Academia Season 6 Release Date dub. However, a dub can also come out as it was done in the past. But how and when it will be released is still unanswered.

The series My Hero Academia is undoubtedly one of the best Japanese anime series with a superhero theme. All of its five seasons released so far have received huge appreciation from the viewers and the critics.

The series has 113 episodes to entertain its viewers, and Season 6 is certain to come with new episodes. Fans desperately wanted to know when is My Hero Academia Season 6 coming out; therefore, we have come up with this article. Although the date is still not confirmed, we will keep updating this page for you. So, fans can bookmark it for updates.

Have you watched all the five seasons of My Hero Academia? If yes, you can tell us which season you liked the most in the comments!