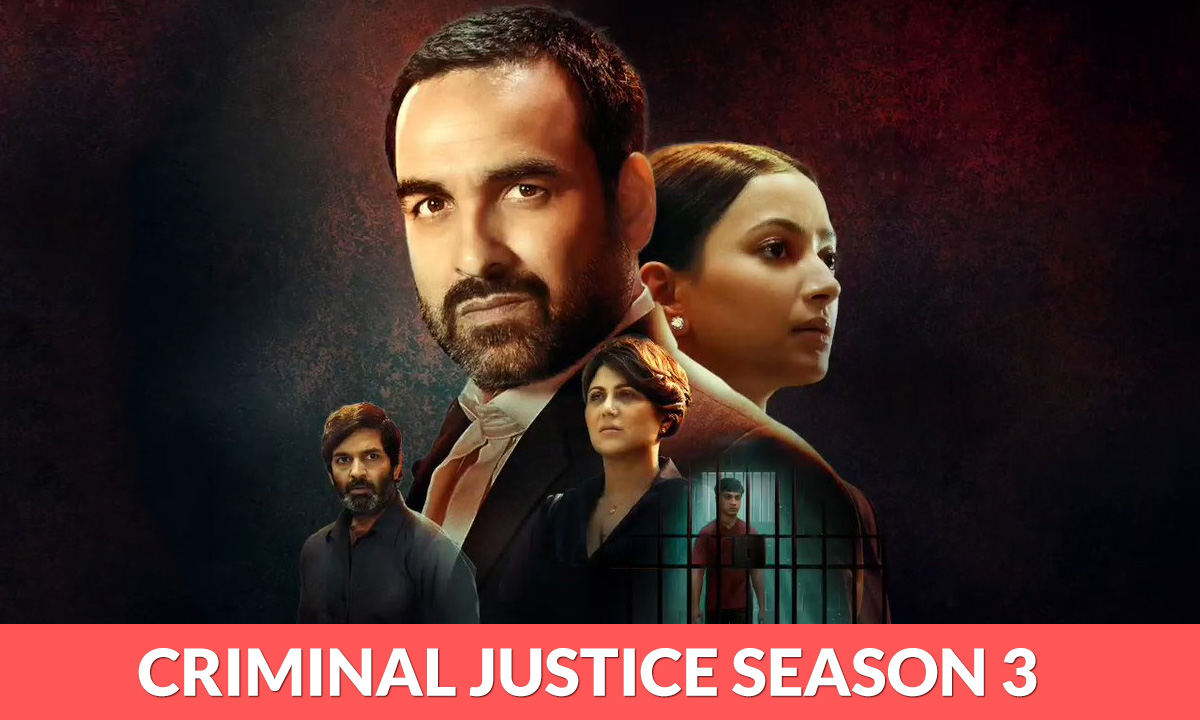 Criminal Justice, a critically acclaimed crime thriller legal drama series on Hotstar Specials, is set to return with its third season near the end of the year, following the success of its first two.

The series story was based on the same British drama broadcast in 2008. However, we have discussed all the series details, including the Criminal Justice season 3 release date.

In the wake of the announcement that Season 3 of the series is on its way, fans are looking forward to seeing their favourite star Pankaj Tripathi as advocate Madhav Mishra again in the role.

There has been an official announcement regarding the release date of the series as well as the release of a trailer in which veteran actor Pankaj Tripathi plays the role of a lawyer in the murder mystery series. ‘Criminal Justice will be released in Hindi, Tamil, Telugu, Malayalam, Kannada, and Tamil on August 26th, 2022.

As the series enters its third season, one of the most celebrated actors in Bollywood, Pankaj Tripathi, returns as one of the series’ main protagonists.

This season, he will reprise his role as advocate Madhav Mishra, and you can expect to see his role as an advocate helping people to get Justice just as it was in the two previous seasons.

As Madhav Mishra in the show, he always stands up for what is right, no matter what happens. There is a strong belief in his heart that the weaker sections of society need to be lifted and supported.

Similarly, Mita Vashisht reprises her role as Mandira Mathur in the show, while Anupriya Goenka reprises his role as Nikhat Hussain.

The film will star Pankaj Saraswat, Rucha Inamdar, Madhurima Roy, and Sarah Gesawat, who will play pivotal roles in the movie.

During the third season, the plot revolves around the murder of Zara Ahuja, who was murdered by her brother, Mukul Ahuja, who is the prime suspect in the case.

Madhav Mishra has taken over the case of Mukul Ahuja as his lawyer, and he takes on the role of representing him in court. In his quest to discover the true reason for Zara’s death, Madhav digs deep into finding the answer, but he is puzzled by the fact that Mukul does not believe him in the process.

He is afraid that Madhav will cheat him, and he might end up in the police’s hands because of it. Madhav Mishra may save Mukul Ahuja’s life, but whether that is possible is unknown.

In the third season, directed by Rohan Sippy, the audience will see Madhav Mishra taking on a strong-willed lawyer, Lekha, who is constantly keeping him on his toes, for which he is always in a state of anxiety.

As you may have already seen, the trailer for Criminal Justice Season 3 has already been released online. There have been a lot of positive comments about this trailer from fans.

Nonetheless, we have provided the following link for your convenience that takes you to the trailer video of season three of Criminal Justice. As a result, viewers can watch it if they haven’t already watched it.

Where To Watch Criminal Justice Season 3?

There is no doubt that Criminal Justice is one of the most popular series on Hotstar. The third season of Criminal Justice was released for OTT streaming worldwide on Friday, August 26th, and will be available for streaming on Disney Plus.

On top of that, the previous two seasons of Disney Plus Hotstar are also available for viewing on the site. This means that the viewer can watch it whenever it is convenient.

Criminal Justice is one of the most anticipated crime dramas in the upcoming season, and there is no doubt about that. A lot of hype has been created among fans and followers of the show since it was released.

There is no doubt, however, that fans of Criminal Justice are expecting a lot of things from the upcoming third season of the series. The third season is expected to be a huge hit, just like the first and second seasons were.