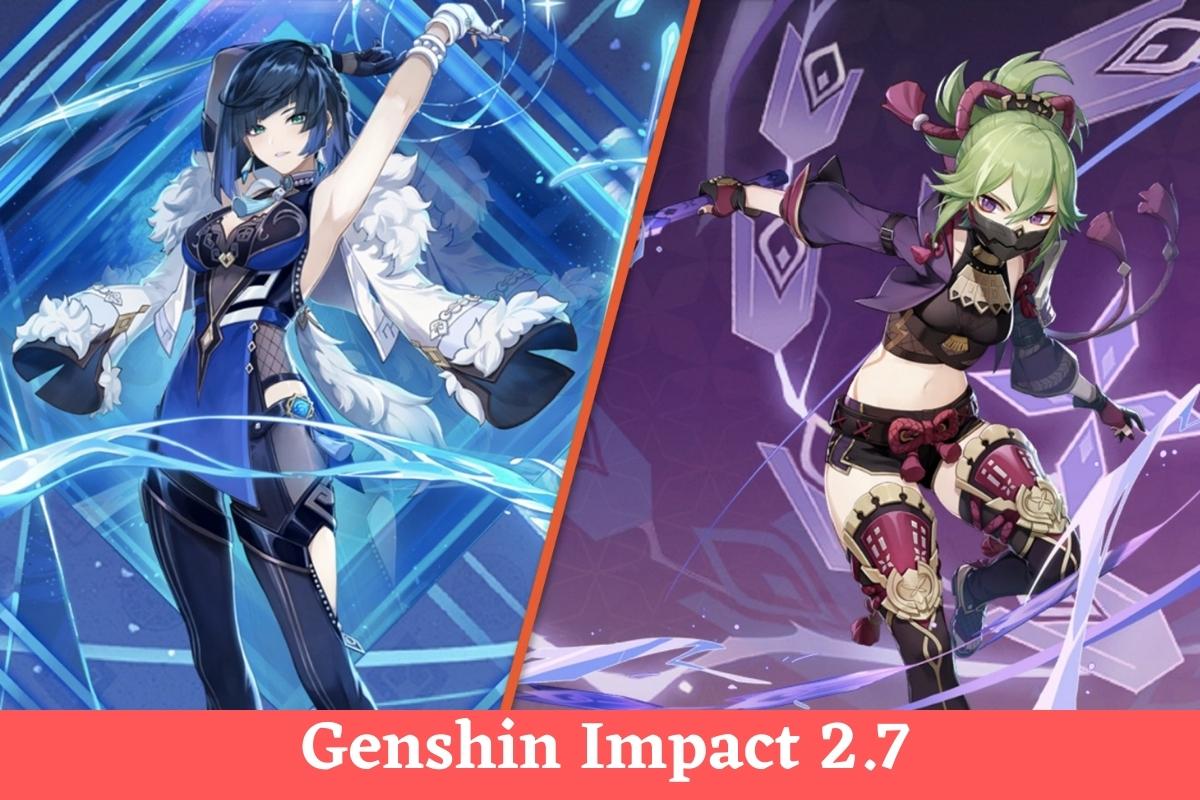 It is planned to conduct a special that Genshin impacts 2.7 livestream a few days before the launch of the game so that fans will get the first glimpse of what the game will be like.

Genshin Impact has officially announced the debut genshin impact 2.7 will have two new characters in the game. The two will be Yelan and Kuki Shinobu, both of whom will be appearing on Twitter’s official handles soon.

It was Yelan who was first glimpsed during Traveler and Ruin Serpent’s first fight. She is a five-star character, and she took part in the initial fights.

According to HoYoverse, Yelan is described as a mysterious person of great power who claims to be an employee of the Ministry of Civil Affairs.

On the other hand, it should be noted that Kuki Shinobu is the Deputy Leader of the Arataki Gang and is unexpectedly believed to be a four-star character that can handle the element of electricity.

Moreover, the data miners have a new weapon dubbed Fading Twilight that has been found to be leaked as well. According to the news reports, this four-star bow can boost the damage and can help in recharging the energy faster thanks to its enhanced attack power.

Upon hearing of a possible rerun of Yoimiya, Keqing, and Klee, we are, however, let to believe that certain leaks may be the cause. However, there is no strong evidence to confirm this speculation.

The banner and update cycle of Genshin Impact is fixed. There are 21 days for banners to be displayed and 42 days for updates to remain active.

However, version 2.6 of Genshin Impact, released on March 30, 2022, is now available for download. As long as there are no unexpected delays, the public release of the 2.7 patches should take place on Wednesday, May 11, 2022.

What to expect from Genshin Impact 2.7 update?

The ongoing beta test for HoYoverse’s action RPG version 2.7 has revealed all of the things to expect from the upcoming update. And as we said above that this new version will surely going to have some new characters, which will make it more interesting.

And not only this, but the fans must keep their expectations high because this new version will also launch two new weapons, which also include Yelan’s signature Aqua Simulacra bow.

In order to encourage players to make their own robots, a Serenitea pot event will be held in the near future. On the other hand, Arataki Itto will take part in an event focused on creating music, with an emphasis on the process.

The next update does not include any details regarding new enemies, but the upcoming launch of a new boss is definitely a thing to look forward to.

In addition to those rumors, there is also the possibility that a new Fatui Harbinger will also appear in the story. Considering the rerun of the Golden Apple Archipielago in Ver. 2.8 might take place.

Although the boss could show up first in the 2.7 version, and after the new boss is revealed, data miners anticipate the new boss will be announced before Sumeru.

MiHoYo published and developed Genshin Impact. It is a role-playing game that is based in an open world, anime-style, with a Japanese theme.

According to the reports, this game utilizes the gacha game mechanic to develop it. The game concerns the adventure of a traveler on a mission of finding his lost sibling in the fantasy world of Teyvat, in which seven different nations, each tied to different elements, exist, and each has different gods to worship.

What are the Genshin impact version 2.7 events?

The leaked information on Genshin Impact 2.7 contains quite a few big events. In this version, it is stated that in addition to special conditions, the players will be expected to adjust accordingly.

Furthermore, Arataki Itto, the resident himbo at Inazuma, will be hosting a festival at the convention center. Arataki Great and Glorious Drumalong Festival” claimed that this festival was greater than both the Irodori Festival and the Lantern Rite Festival.

There might be the possibility of players claiming a little drum as a reward, similar to the lyre they won at last year’s Windblume Festival.

Along with the aforementioned two events, two smaller ones have also been leaked. The game is soon going to release, and not only this, but the fans are also waiting eagerly.

Tower Of God Season 2 Release Date, Cast, Plot, Trailer And Everything We Know So Far