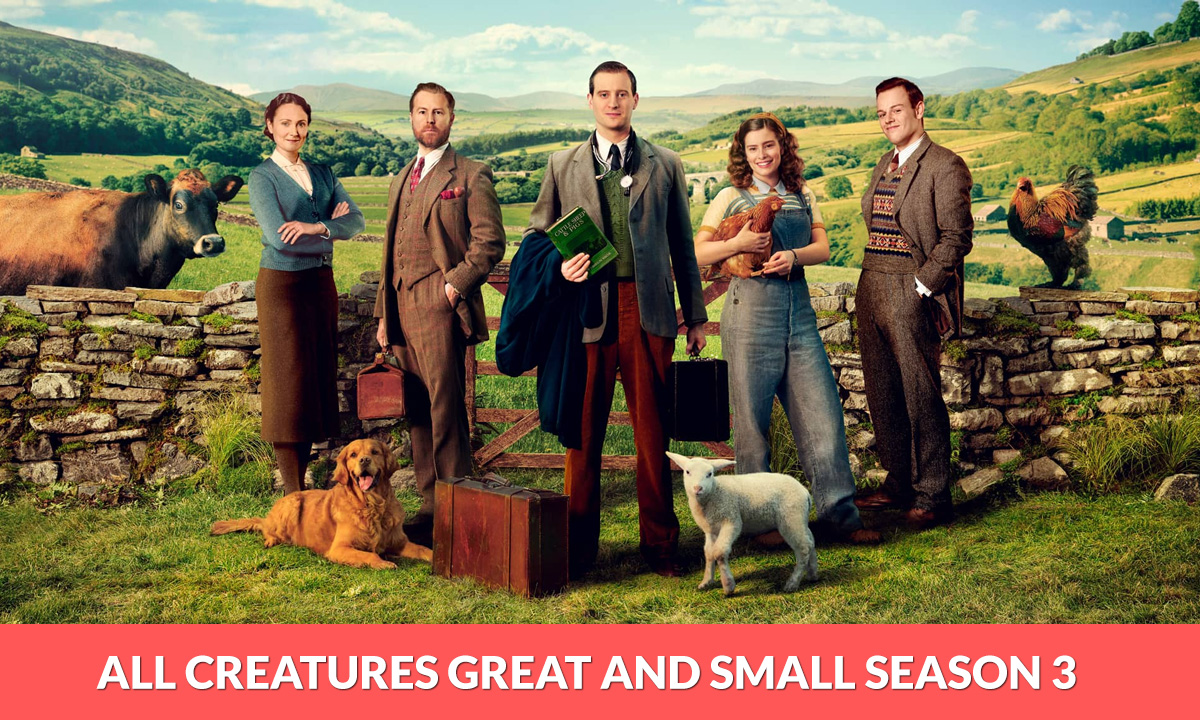 Fans of the drama series All Creatures Great and Small will be pleased to hear that it will return for a third season shortly.

Based on the books written by real-life vet Alf Wight, who wrote under James Herriot in the 1930s, it is set in the Yorkshire Dales during that time. However, we have discussed all the details, including the All Creatures Great And Small season 3 release date.

An announcement has been made that the new episodes will begin airing in America at a particular time. There has been confirmation from Masterpiece on PBS that the Skeldale House gang will be returning in early 2023 to tackle more creatures and crises than ever before.

There will be an opening episode of the show on Sunday 8 January 2023 at 9/8c on the channel, which viewers can catch online or on TV. Throughout the six-episode series, which will be broadcast every Sunday night until the end of the series on Sunday, 19 February, the show will air in the same slot each week until the series is over.

All Creatures Great And Small is one of the most anticipated series and has created a lot of hype among the fans. Thus we can say that fans are eagerly waiting for the third season.

Among the cast of All Creatures Great and Small is Nicholas Ralph, who plays James Herriot. Despite Ralph’s television debut, he can slide right into the role with ease and as if he had lived there all his life.

In addition to Samuel West from Persuasion, Howard’s End, and Mr. Selfridge, the series has been nominated for some of the best period dramas of all time.

It is impossible not to love West’s eccentric Siegfried, as he brings experience to the quirky character. In addition, Callum Woodhouse also plays Siegfried’s younger brother, Tristan Farnon, a troublemaker who tends to cause trouble.

Masterpiece fans may recognize Callum Woodhouse from The Durrells in Corfu, another incredible period drama. With their fantastic chemistry, the veterinarians work seamlessly and seamlessly with each other.

Throughout the upcoming new season of All Creatures Great and Small, various wedding bells will chime, and animals will suffer from various ailments.

As the wedding preparations for James and Helen commence in the spring of 1939, the first episode of season three begins. James will be on the outs with local farmers if he participates in the government’s program to help vets test cattle for tuberculosis.

There will also be many new challenges for Helen, not the least of which will be letting go of her old life to find her new home within the welcoming yet eccentric embrace of Skeldale House, a house she is sure to love.

Tristan finally completed the exam, and now that he is qualified as a vet, he has to face the real world. In preparing for war with Germany, Siegfried, Skeldale House’s irrepressible proprietor, contends with painful memories of his service in the Army Veterinary Corps during the First World War.

Unfortunately, no trailer has yet been released for the third season of the series. However, we have mentioned the trailer link for season 2.

Thus viewers can watch it in case they have not watched it yet. The link is mentioned below:

Where To Watch All Creatures Great And Small Season 3?

The full episodes of All Creatures Great and Small are available on Amazon PBS | MASTERPIECE, a channel open to Prime subscribers.

Thus we have discussed the details, including the All Creatures Great And Small season 3 release date, and now we have also mentioned where this series is available.

All Creatures Great And Small are one of the most anticipated series of all time and have attracted significant attention and enthusiasm.

Despite this, All Creatures And Small fans eagerly look forward to season 3 of the series.