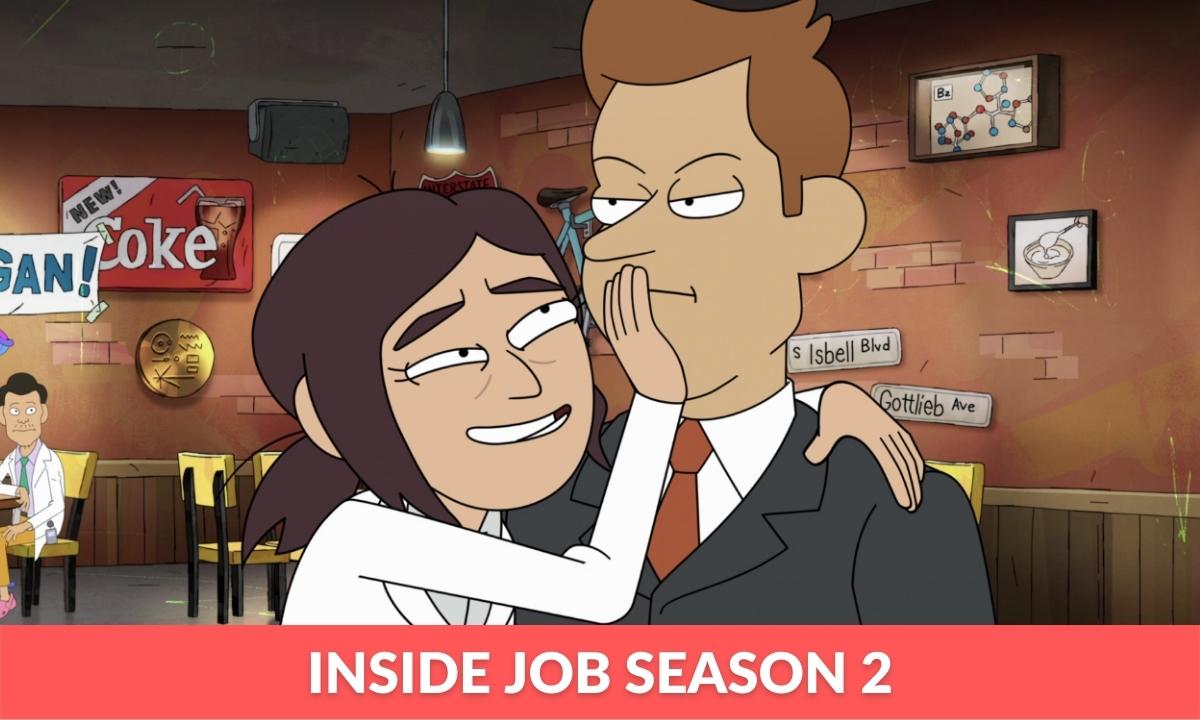 What if every crazy conspiracy theory is true? According to “Inside Job” on Netflix, they are! This engaging adult animation comedy focuses on the clever and reticent scientist Reagan Ridley (Lizzy Caplan) and her wacky coworkers at Cognito Inc.

This shadow government corporation rules the globe surreptitiously. ‘Inside Job’ is the streaming giant’s first original adult cartoon series, created by Shion Takeuchi. It combines the tension of a workplace comedy with the bizarre eccentricity of absurd conspiracy theories.

Season 2 of the famous anime Inside Job is greatly anticipated by fans, who are impatiently awaiting its release date.

In the Inside Job season 2, expect a furious and maybe vindictive Reagan. After preparing herself to become CEO of Cognito Inc. and facing her father for manipulating her upbringing, Reagen was prepared to steer Cognito in a new direction.

However, her triumph was short-lived when she learned that the Shadow Board had replaced her with her father as the company’s leader.

Reagen had disowned and exiled her father to Cognito, but now that he is her boss, she will be forced to face him daily. However, this allows Reagen to have her father fired, as he was previously sacked for nearly disclosing the deep state’s existence.

If Reagan is prepared to sacrifice her father for her profession, the Shadow Board may take her seriously as CEO. Reagen might also follow in her father’s footsteps and attempt to expose the deep state to the public.

The audience reception to Inside Job Season 1 has been quite positive. After the first season of Inside Job, Brett accidentally enters Reagan’s head and later invites a young Reagan to a school dance, where he discovers the password.

Bear-O moves his focus to Rand and Reagan after discovering that her father wiped memories of her childhood buddy Orrin and, as a result, he would not hold her back intellectually as part of an insurance strategy to re-enter Cognito.

Later, the crew locates Alpha-Beta and encourages him to battle Bear-O. The two bots then brawl, delaying Bear-O long enough for Brett to reveal the password to Reagan: Orrin.

Later, she deactivates Bear-O, confronts Rand for interfering with her thoughts, and ejects him from her house and Cognito.

The next day, she is approached by the Shadow Board, who notifies her that she will no longer serve as Cognito’s leader due to the turmoil under her watch.

Since J.R. is being transported to Shadow Prison X for several offenses against the Shadow Board, Rand, the largest shareholder, will assume leadership.

The Inside Job Season 2 trailer has not yet been debuted. It appears that its publication is imminent. Let’s watch the promotional video for the first season of Inside Job. It was made available on Netflix on September 26, 2021.

Where to Watch Inside Job Season 2?

Inside Job season 2 will release on Netflix, and season 1 of the series is available to stream on the same platform.