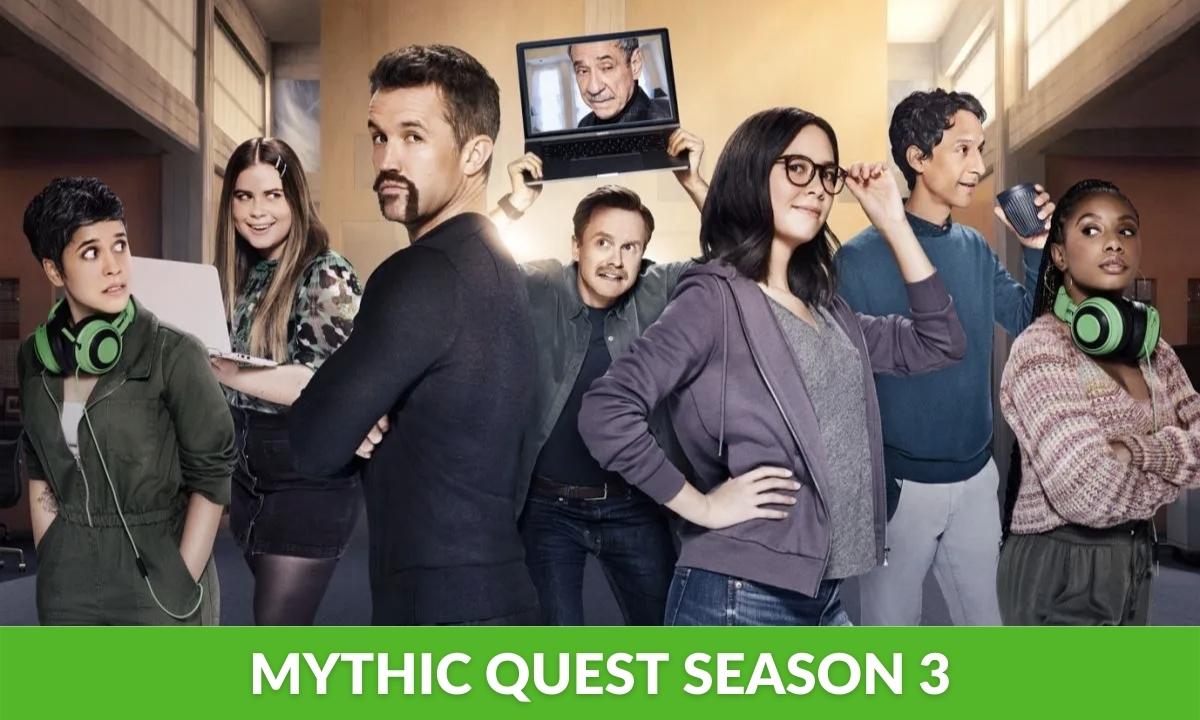 Mythic Quest is a drama comedy show that depicts the storyline of the members of a successful video game development organization.

The show earned fame from the anime video game, which is also the company’s main thing. The series was recognized as Mythic Quest: Raven’s Banquet for season 1. The business-based series initially premiered on February 7, 2020.

Moreover, the show is based on the regular formula for drama; it stands out as it spins throughout the gaming field. Moreover, the intelligent composition and the reliable roles of the cast have also gotten fame and praise from fans and critics.

The series is amazing and comedy-loaded as it describes the cast from various angles, which makes it real and reliable for fans. After watching season 2 of the series, fans are waiting for season 3. So, when will Mythic Quest season 3 be released? Here are all the details that you must know.

BREAKING: Big announcement from Sir Anthony Hopkins and Jason Sudeikis (and Ron something) #MythicQuest is returning for Seasons 3 & 4 pic.twitter.com/OugCaIWwjv

But there is no fixed release date for the season. Considering all the facts, we can anticipate season 3 to release in the ending months of 2022 or starting months of 2023.

The anticipated cast of Mythic Quest season 3 is as follows:

Ian and Poppy work alone to extend the video game over the second season but come together in the season finale to make crucial decisions.

They are assisted by C.W. Longbottom, who knows how it feels to lose relationships when one refuses to recognize vulnerabilities.

We also learn about Longbottom’s history and how he became the guy he is now. Dana and Rachel’s friendship is tested, but they eventually enter the professional world together.

If a third season is produced, we will learn what each individual’s unexpected plot developments in the season two finale imply. Will Poppy and Ian continue to pursue similar artistic endeavors?

Dana and Rachel are destined to endure a major transformation with their decision. Nicdao revealed in June 2021 what she would want to investigate in the third coming season.

The actress stated that it would be intriguing to observe Poppy assisting her co-workers. She also desired that the series illuminate the origins of Poppy and Ian’s professional connection. Therefore, these features may appear in the third season.

As previously said, the series is based on development of the popular video game Mythic Quest. The first two seasons focused on how the game was built, and in the second season, it appeared they were very close to developing the game.

It was discovered that the squad had mysteriously dispersed at the very last important time. David’s circumstances were unimaginable when he learned that his co-worker pals were parting ways since he had had numerous challenges in his connections but always found his professional relationships to be dependable.

Those of Ian and Poppy Li followed the departures of Rachel and Dana from the team; thus, David may be unable to adjust to all of these changes.

David and Joe are now the sole persons still working on the game. Thus, seeing where they take the idea in the third season will be intriguing.

The show’s official trailer has not been released yet, though the premiere date of Season 3 has been announced. For now, you can watch the trailer of Season 3 below:

Where To Watch Mythic Quest Season 3?

Mythic Quest Season 3 will release on Apple TV+. For now, you can stream previous seasons of the series on the same streaming platform.

That’s all about Mythic Quest season 3. I hope you find this post helpful. Please let us know in the comments section if you have queries about this! We will be happy to help you. Stay tuned for further updates!